Welcome to the walls of MuraLi

Below you can find more information
and the current status of each wall we are working on.

ON THE MAP SEE MURALS REQUEST A WALL

WHERE TO FIND OUR WALLS

Click a wall below to scroll to the project 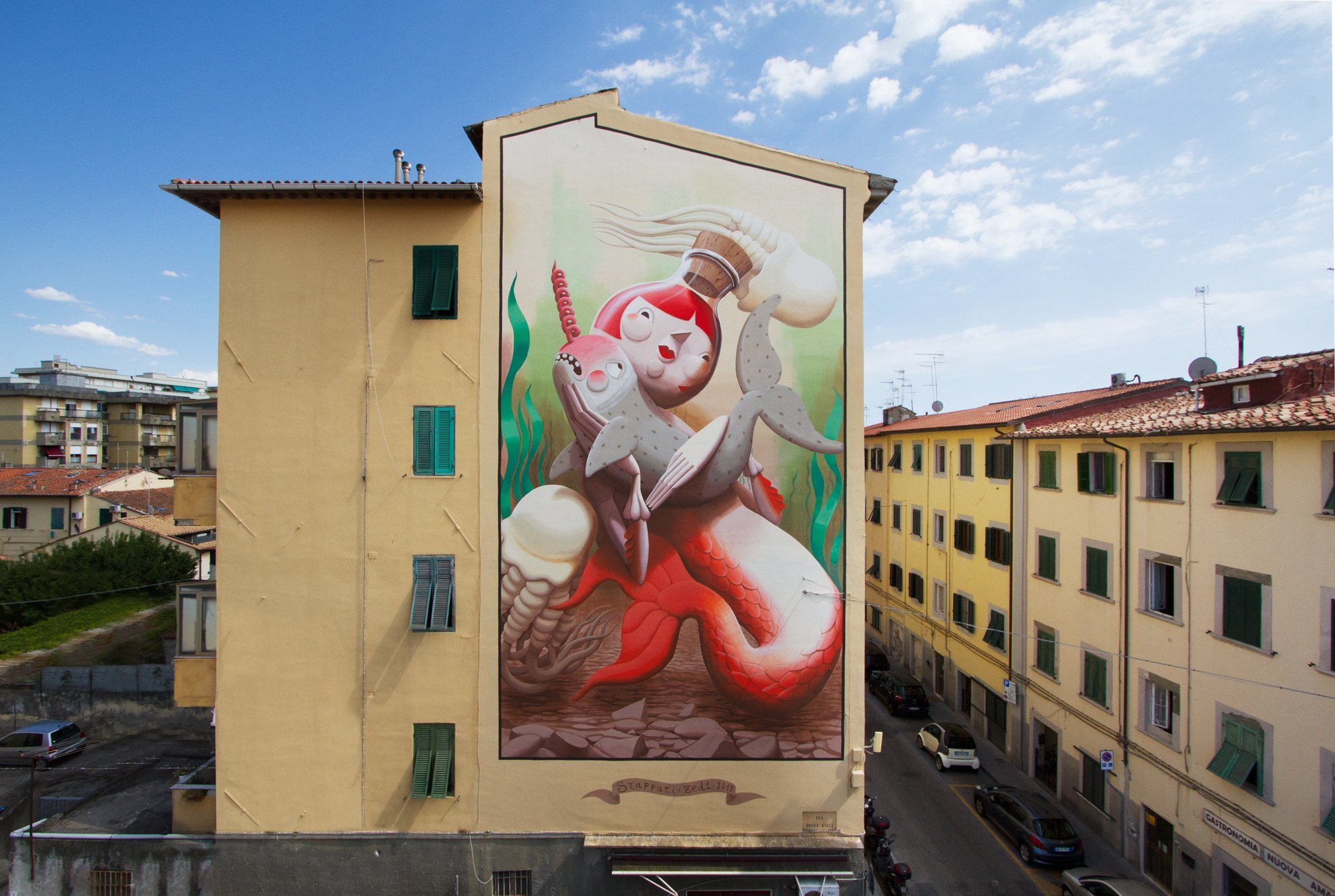 The facade in Borgo dei Cappuccini is of mayor size.

Zed1 pays homage to the city of Livorno representing a bottled mermaid holding a narwhal in her hand symbolizing a corkscrew. The bottle is a clear historical reference to messages sent by sailors in ancient times. The deeper meaning of the work incites the observer to free himself from preconceptions and patterns in which we live: in fact the mermaid, whose head is still enclosed in the bottle, to be really free and let her ideas flow into the sea, she is forced to open the cork.

The fact that she still remains trapped without being able to get out, indicates that it is precisely her thoughts itself that are not yet free.

The mural, carried out from the 1st till the 12th of July 2019, was possible thanks to the contribution and active participation of the citizens of Livorno and thanks to the support of MuraLi’s project partners: Venpa GV3 – Sikkens Italia – NonSoloBagno – Comune di Livorno

The mural, entitled “L’âme de Montparnasse” honors the passing of Amedeo Modigliani, (1900), shaping a ‘fil rouge’ between Livorno – the place where Modigliani was born and raised – and the Parisian Montparnasse neighborhood, where Modigliani developed his creative genius, giving life to his most important works, in his unique and unmistakable style.
The work takes its cue from one of the few photographic portraits of Modigliani that has survived to the present day.
In the lower part of the wall, Paris’ historical literary café “La Rotonde” is referenced, which Amedeo used to frequent. La Rotonde was a meeting and exchange place for the most important artists, writers and leading figures of the time, including Diego Rivera, Max Ernst, Paul Gauguin, Ernest Hemingway, Gibran Khalil, Kandinsky, Henry Miller, the French poet André Salmon, Jean-Paul Sartre and Jean Cocteau, as well as the famous Russian exiles Lenin and Trotsky. 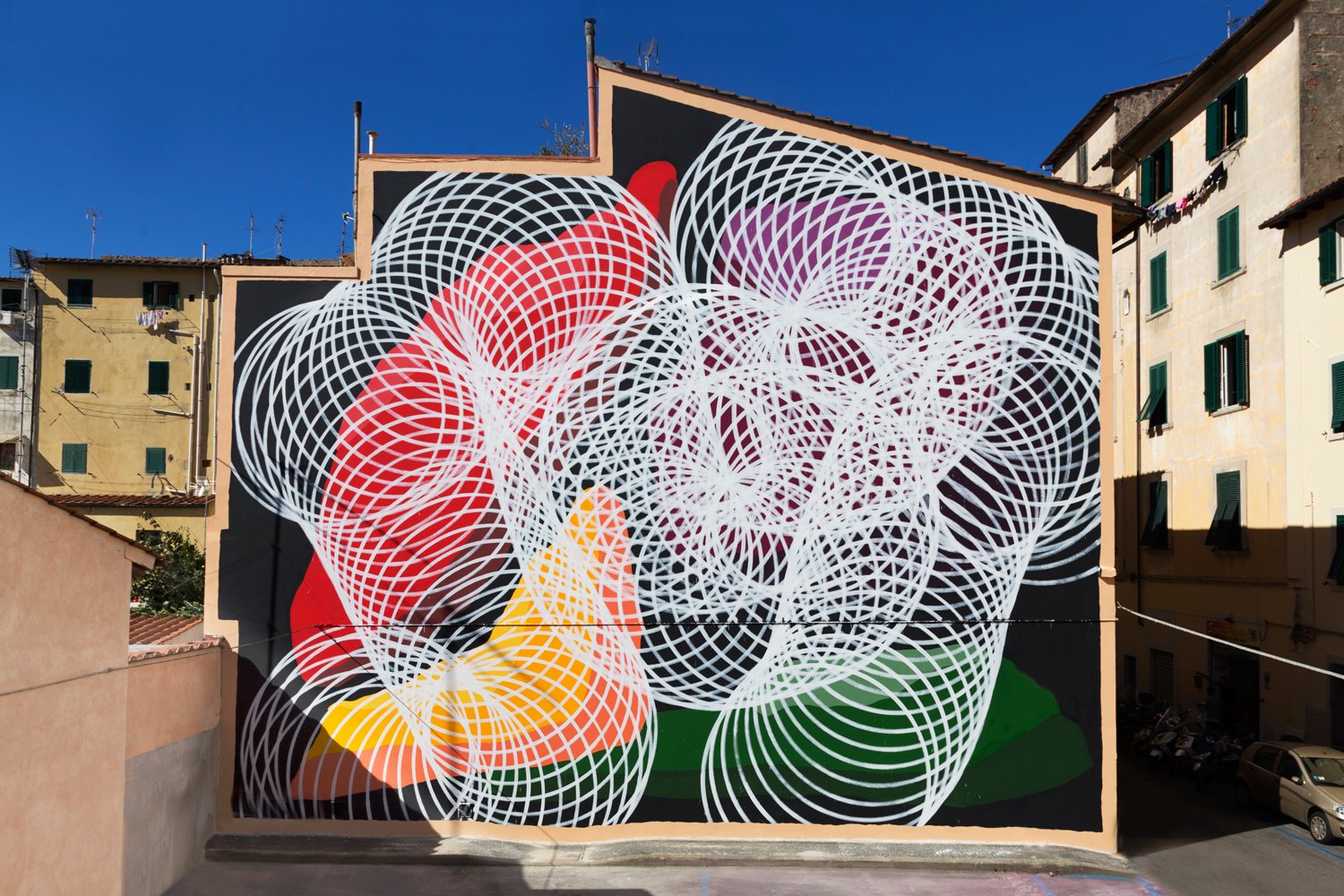 The surface situated on Via dei Carrozzieri is a hidden gem.

Located in the heart of Borgo, in a quiet passage way connecting Borgo dei Cappuccini and Via San Carlo, a little square emerges, these days frequently used as a parking space.

Moneyless manages to create an unique and recognizable style that has led him to be identified among the pioneers and masters of abstract muralism in Italy and abroad.
What it’s important for Moneyless is to let the audience think freely. He never want to convey a certain message in his works, but he try to make the audience curious about any possible meanings or interpretations.”
The mural is curated by Mura-li with the support of the Municipality of Livorno, CCN Borgo, the L.E.M. Livorno, Pro Loco Livorno

Another important wall is the appearance in Via San Carlo.

A tall and spacious wall, located halfway down Via San Carlo, connected to an often overlooked passage way leading into the center of Livorno.

The wall, situated at the beginning of a path which connects Via San Carlo on one side, passing a park, a parking and the famous ‘English Cemitary’ to the exit situated near Piazza Cavour and shopping street of Via Ricasoli. An ideal shortcut to travel in and out of the center.

The park ‘Parco del Odeon’ is one of few parks in Borgo and offers a green area for playing kids and their parents, the local youth and for the elderly to gather and sunbathe.

Via San Carlo provides the opposite direction of Borgo dei Cappuccini, thus leading deeper into the original core of the neighborhood Borgo and towards the harbour of Livorno.

The project for the Bosco dei Cappuccini in Via Cecconi, a stone’s throw from the city center, is part of an urban redevelopment vision of this small city oasis. The enhancement of this biodiversity heritage is not only desirable, but also necessary in anticipation of a city that is more eco-sustainable and more attentive to the environmental cause.

The goal is therefore to create an environmental themed mural at the entrance to the park, to install birdhouses involving children and young people from primary and high schools in the neighborhood and the city together with the support of Lipu and Studio Bonsai Livorno. to make this green area a real educational forest open to all citizens. 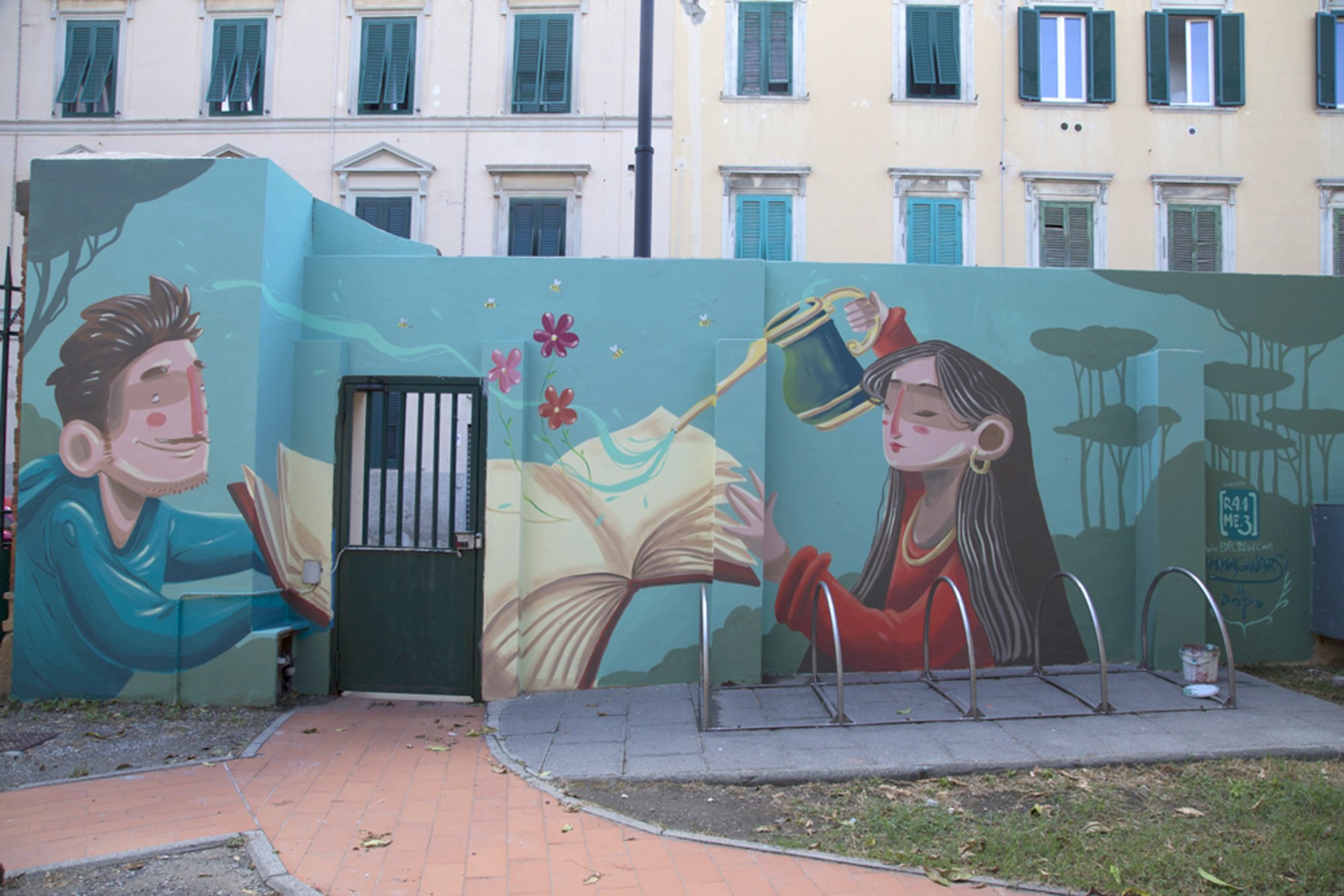 Text will be added soon.

We really appreciate all the help we can get.
The Murali Project is depending on external financial support to get the started and to make sure it keeps growing!

Want to contribute to by donating a wall?

Contact us, we help you get the needed permissions arranged and we help you find the right artist for the job.

We can help to obtain the funding and make sure everything is arranged for realising the mural.

"Together we give color to the city!"